Most crypto assets are trading in red on Tuesday following a broad-based market sell-off. IOTA (MIOTA) is attempting a rebound after dipping to lows at $1.12 in today’s trading session. At the time of writing, IOTA was exchanging hands at $1.329, up 5.42% in the last 24 hours. IOTA officially unveils staking on Nov. 16 as holders can now stake their IOTA tokens to get free Shimmer (SMR) tokens. However, Staking in IOTA will work differently than in traditional Proof of Stake, being a process whereby IOTA token holders can participate in the open distribution of any kind of new token, otherwise defined as “rolling airdrops”. The Iota Foundation also announced the upcoming launch of its staging network, Shimmer which will ensure that all upcoming Iota upgrades are community-approved before roll-out. In mid-October, the Iota Foundation had released its smart contract beta platform to enable the feeless transfer of assets across chains.

IOTA is trying to build intermediate support around the MA 50 at $1.313 after the $1.12 level came into the rescue to impede the sell-off from today’s $1.52 high. The technical status, however, remains that of consolidation as the RSI is hovering near the 50 neutral levels. 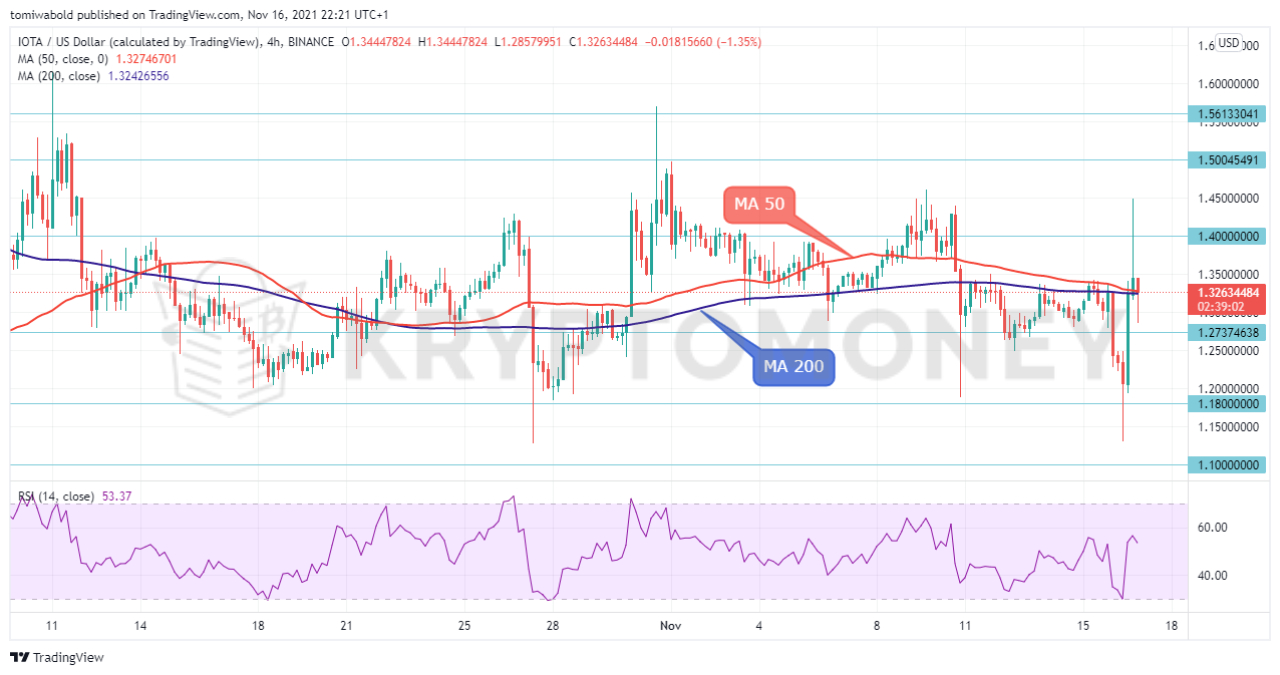 IOTA staged a sharp rebound after dipping to lows around $1.13 in today’s trade. An oversold RSI prompted sellers to take profit, offering the IOTA/USD pair a chance to claw back some losses. Despite this, the price action seems vulnerable to the downside as the RSI is pointing downwards. The $1.18 and $1.13 levels are the targets if selling pressure picks up again.

Alternatively, If buyers regain control, the $1.40 and $1.56 levels are the hurdles bulls might have to contend with. Overall, consolidation holds sway with the IOTA/USD pair moving sideways between the $1.12 and $1.61 boundaries. Any violation of these limits would alter the neutral outlook accordingly.

Note: Kryptomoney.com is not a financial advisor. Do your research before investing your funds in any financial asset or presented product or event. We are not responsible for your investing results