If you are long Grayscale Litecoin Trust (OTCQX:LTCN), someone is taking advantage of you. Slowly and inexorably. For this someone, LTCN is like a free money tree. This article will explain why.

It all starts with something I have written about already: LTCN trades at a gigantic premium to its NAV (Net Asset Value) – the value of what LTCN holds. In other words, LTCN trades for about 10 times what it’s worth. This isn’t hidden. It’s right there in Grayscale’s LTCN webpages:

Already, it’s very misguided for someone to buy LTCN at $240 when the trust holds only $23.50 in actual Litecoin. Might as well make a bit of effort and buy Litecoin through some crypto broker. But it doesn’t stop here. This wouldn’t make LTCN a free money tree.

The other relevant matter is that LTCN allows new subscriptions to be made. It’s also right there in Grayscale’s website. But there’s a caveat:

The caveat, also above, is that shares which are subscribed have to be held for one year. But now the most important thing: When you subscribe new shares in a Trust or ETF you do so at the fund’s NAV, not at its market price. So, each time someone subscribes LTCN, and only qualified individuals and authorized institutions are allowed to do it, this someone buys LTCN at $23.50!

That’s the money tree right there. And if you are holding LTCN, then Warren Buffett has a quote which applies to you:

Indeed, if you aren’t certain that you understand and can value your business far better than Mr. Market, you don’t belong in the game. As they say in poker, “If you’ve been in the game 30 minutes and you don’t know who the patsy is, you’re the patsy.”

I showed the game being played. Someone is buying for $23.50 what the market is paying $240 for. But is someone really doing this? Yes, there’s direct proof that it’s being done, and being done heavily. Look at the LTCN shares outstanding when I published my first article on it: 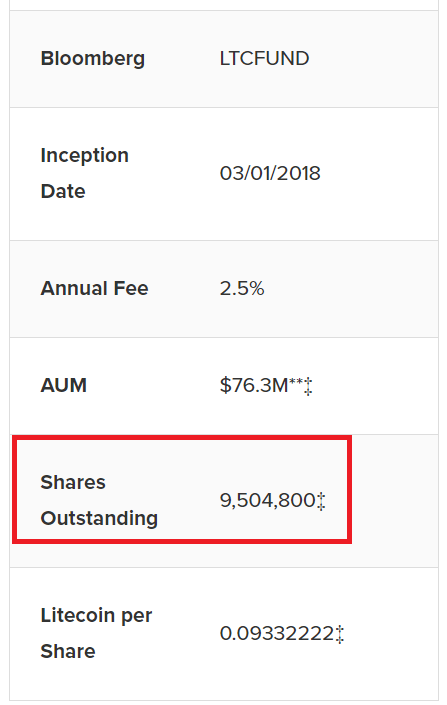 Now look at them now:

6.74 million new shares in just a few months. Since there has been a difference of at least $200 on average between the market price and the NAV, that means someone is pocketing a $1.35 billion gain on these shares. Of course, with one caveat: Except for using short sales, these shares can only be sold one year after they’ve been subscribed. But sold they will be.

Also, there’s a bit of a self-fulfilling prophecy happening right now. The Grayscale fund is a buyer of Litecoin in the marketplace. This is so because the subscriptions force the fund to buy Litecoin.

However, the impact of LTCN buying Litecoin is not large on account of the extremely low NAV per share. These 6.74 million shares, at an average NAV of, let’s say, $20, would imply less than $140 million in Litecoin purchases. Litecoin itself now carries a $18.5 billion market cap, so these purchases are rather small in aggregate.

It makes no sense to hold LTCN shares, they’re priced at 10x the value of their underlying Litecoin.

Someone is taking advantage of this and their special status, by buying stock at NAV. This stock will at some point find its way into the Portfolios of those willing to buy LTCN at market prices. It’s nearly impossible for this situation not to result in heavy losses for LTCN buyers in the marketplace.

LTCN is hard to borrow, because naturally those subscribing shares at NAV want to lock in their gains (by selling the stock short until their newly-subscribed LTCN shares “mature”). However, the short fees are low (under 5%).