Summer Rae appeared on FOX Business’ “Cavuto Coast To Coast” show on Monday and announced that she will have part of the pay she receives for Saturday’s WWE Royal Rumble return converted to cryptocurrencies. This makes Rae the first known female pro athlete to do so, following a recent trend among male pro athletes.

Summer made her return to WWE TV on last Friday’s SmackDown, and will make her in-ring return during Saturday’s 30-Woman Royal Rumble Match.

You can see footage of Rae on “Cavuto Coast To Coast” below, along with the full announcement on part of her Royal Rumble pay being converted to Bitcoin and Litecoin: 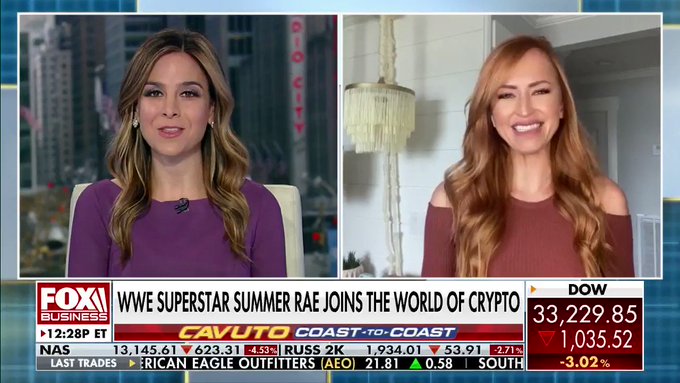 Portion of January 29, 2022 Royal Rumble Earnings To Be Converted Into Bitcoin and Litecoin, Making Her the First Female Athlete To Ever Do So

As more professional athletes are starting to get paid in crypto I think it’s important for female athletes to as well. I am excited to be at the forefront of that movement!”

BRENTWOOD, TENNESSEE, UNITED STATES, January 24, 2022 – Danielle Moinet, also known as WWE Superstar Summer Rae, announced today on FOX Business’s ‘Coast to Coast with Neil Cavuto’ that she will become the first known female professional athlete to have a part of her pay converted to cryptocurrencies when she competes in the upcoming WWE Royal Rumble on January 29th in St. Louis, Missouri.

Danielle, who also made news earlier last year when she was the first female professional athlete to be named to an executive position within a cryptocurrency focused company (Cornerstone Global Management, Inc.), has decided to also receive a portion of her upcoming Royal Rumble pay in Bitcoin and Litecoin through an automated conversion made by Hedge, the pay conversion platform run by the same company.

Many athletes have come forward recently to state they have or will be converting all or some of their pay, signing bonuses or other income into cryptocurrencies, but all have been males. This is not lost on Danielle as she prepares to re-enter the ring as Summer Rae.

“Going back to wrestle in the WWE’s Royal Rumble PPV is very special for me as there have only ever been 4 Women’s Royal Rumble matches. I used to watch it growing up every year & imagine my name on the big screen though it was only men on my tv screen.” mentions Danielle. “I am excited to be converting some of my pay from the PPV into crypto with Hedge. As more professional athletes are starting to get paid in crypto I think it’s important for female athletes to as well. I am excited to be at the forefront of that movement!”

David Schwartz, the CEO of Cornerstone Global Management, Inc. also agrees its time for female athletes to be able to take center stage and be recognized within the cryptocurrency space.

“I’m very excited for Danielle. She’s getting to go back into the ring, which is something she’s wanted to do for a bit now, and also putting her money where her mouth by actually converting some of her pay into crypto. It’s a watershed moment for female athletes to be included in the crypto space, and I’m proud she’s the one who is able to usher that in.”

Hedge is built to scale so employees, independent contractors, etc. can seamlessly convert a customizable portion of their compensation into crypto and securely deposit it into their individual wallets, or leave it directly on Hedge. Hedge’s platform allows a person’s pay to still be sent out in government backed money like the dollar from employer/payer to employee/payee, so neither side incurs a separate taxable event at the original point of pay.

Have a news tip or correction? Send it to [email protected]