Tamadoge is the first meme coin universe with an integrated NFT store within the Metaverse. The project operates using the play-to-earn mechanics and is out to get the top position from elite meme coins Shiba Inu and Dogecoin—by leveraging its superior token utilization.

To stay afloat with the competition, Shiba Inu revealed that they are working on a metaverse (known as Shiberse) and their collection of NFTs.

Shiba Inu (SHIB) and Tamadoge (TAMA) native tokens are fast gaining popularity with their proposed and in-built utility, respectively. This article dives into the similarities and differences of these affordable meme coins. We all wonder which of the two is a better investment and comes up to par with other top metaverse games like Lucky Block and Battle Infinity Tokens.

Tamadoge and Shiba Inu are meme coins designed after the legendary dogecoin. Both are meme tokens trying to launch excellent token usage. For one, Shiba Inu grew from being virtually useless to making huge initial gains and now using its widespread reputation as leverage to attract investors for its proposed utilities. As the newest meme coin, Tamadoge aims to change the perception investors have about meme coins.

Shiba Inu (SHIB) is unreasonably abundant with an over maximum supply of 1 quadrillion tokens. It has much more supply than demand which is why it may never compete with popular tokens like Ethereum and Bitcoin. In contrast, Tamadoge (TAMA) has a capped max supply of 2 billion tokens. Users can not be allowed to hold billions or trillions of this token, unlike SHIB. Not to mention that developers have put a system in place where 5% of all TAMAs spent in the ecosystem are burnt. With this, the max supply of TAMA coins will reduce while demand increases; hence the value will rise in the long run.

Most of Shiba Inu’s popularity can be attributed to Elon Musk’s social media backing. Many investors purchased the coin in 2021, believing it had much to offer, but they ended up selling their tokens due to its limited functionality and use cases. The team is working hard to remedy this. Shiba Inu is developing its metaverse, dubbed ‘shiver’ and other use-cases.

In contrast, Tamadoge has established itself as a P2E decentralized platform where users can earn doge points and unique NFTs from playing games. The Tamaverse has various reward pools, multiple NFT avatars, and trade assets. In this case, it is evident that TAMA’s popularity is due to its success

US IRS laws require investors to pay tax on crypto. Shiba Inu takes tax cuts from each transaction. But. These cuts are used for the long-term funding of the project. On the other hand, Tamadoge is yet to begin transaction tax. The developers mentioned that they do not believe in taking cuts from investors and are more interested in generating enough value from the system itself. For now, Tamadoge investors earn more tokens when buying or selling a certain amount in dollars.

Shiba Inu doesn’t offer investors NFT interoperability. However, with the proposed creation of Shib NFT tokens, it might happen in a few months.

The Tamaverse has an active NFT interoperability. Investors have an opportunity to purchase, breed, create, or trade Tamadoge pets. These dog-like avatars are minted as NFTs using the platform’s smart contracts. You get to buy characteristic Tamadoge pet NFTs and also compete with other Tamaverse users for points on the leaderboard. If you top the board at the end of the month, you get to earn TAMA and NFT pets.

Listings on popular decentralised and centralised exchanges increase a token’s popularity and credibility.

SHIB is listed on major decentralized exchanges worldwide, like Binance and Coinbase. Early this year, it got listed on Robinhood, VALR, FTX, Bitstamp, and the Chinese exchange OKX.

In contrast, Tama just completed its presale and is poised to launch in late Q4. The team has confirmed future listings are lined up. Exchanges like LBANK and UniSwap have secured that TAMA would be listed on their platforms once deployed. You can expect the token to attract higher price increases and trading volumes.

The crypto market has been highly volatile since the beginning of the year. SHIB tokens were significantly affected by the bloodbath, while TAMA showed excellent resistance. Below are the price predictions for both coins based on technical analysis.

A Quick Look At The Top 3 Tokens In The Metaverse— TAMA, LBLOCK, and IBAT

Tamadoge (TAMA) is the utility token of the Tamaverse. It serves as the native asset of the P2E gaming platform, which provides users with non-fungible token interoperability and crypto rewards. By the end of 2022, owners of the native TAMA token will be able to mint NFT pets, serving as the centerpiece of a P2E game.

Owners may take care of, feed, and grow their pets in this game based on the popular Tamagotchi game from the 1990s by competing against other competitors for a spot on the monthly leaderboard. After the release of augmented reality software, the 3D NFT dogs will also emerge from screens and into the real world, where gamers and pets can explore and search for tokens.

TAMA uses rigorous tokenomics, in contrast to DOGE and SHIB, which are inflationary and were never intended to be used as currencies but rather as a store of value.

The Lucky Block Project is a crypto lottery competition and rewards platform for NFT enthusiasts. Players compete to earn rewards from the platform’s native tokens, LBLOCK. Unlike the other top new tickets, LBLOCK implements a 12% tax on every transaction within the ecosystem. The medium explains that the tax is to encourage long-term holdings and fund the lottery prize pool. 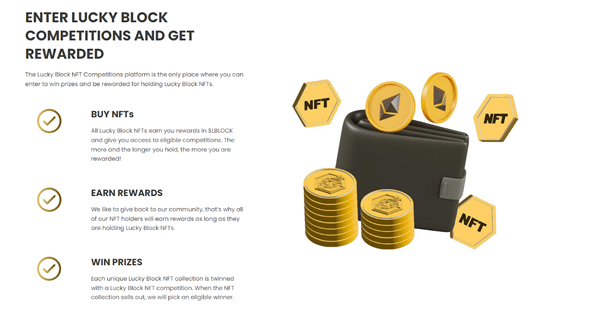 The Battle Infinity platform is a crypto multiplayer game designed as a decentralized P2E Metaverse. It provides investors and gamers with the opportunity to partake in fantasy sports competitions to win rewards in the form of the ecosystem’s cryptocurrency IBAT and unique NFTs. The platform’s most famous feature is the  IBAT Premiere League.

SHIB and other meme coins should be wary of IBAT, TAMA, and LBLOCK. These three tokens are catching up with the rest and will likely save the meme coin ecosystem. We advise you to invest in these projects now that they’re cheap for high ROI long-term.